This couple really went for it – a fairytale chateau in sunny France, nine dress changes and a helicopter entrance. 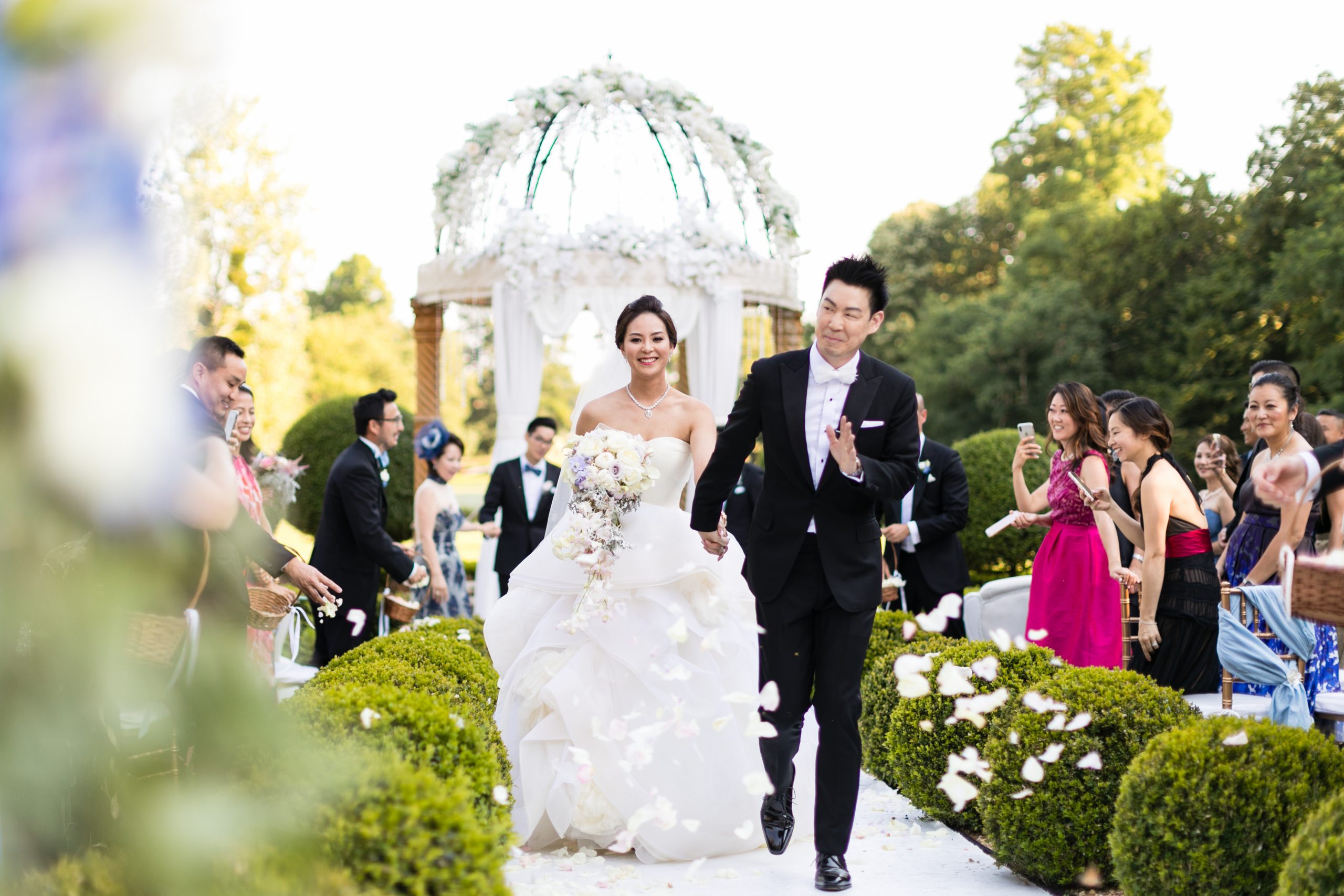 When it comes to real weddings, not many packed as many punched as this extravagant fairytale-inspired affair in Northern France.

When Carolyn Fungand Henry Kiang were introduced to one another through a mutual friend, neither could have imagined the beautiful love story that was to unfurl before them. Both working respectable jobs in Real Estate and Finance, these two tycoons fell head over heels for one another and Henry’s proposal spoke volumes of their amazing connection.

An avid Harry Potter and fairytale stories fan, Carolyn was swept off her feet as Henry planned the perfect proposal for her by writing her a 200 page book based upon the Harry Potter world and their love story. He had the book bounded to look exactly like a Harry Potter book, and he hid it inside of the Library at the Battery (the very first place where Henry and Carolyn met).

He surprised her with a beautiful and romantic proposal with just the two of them, and right after the proposal, the pair walked to 5a5 Steakhouse in San Francisco, where Henry had planned an elaborate proposal dinner party with 38 of their closest friends and family.

As evidenced, Henry had already set the bar pretty high, so it was important for the couple to tie the knot somewhere truly magical. Step in Chateau Challain – a spectacular castle nestled in the Anjou region of Northern France with majestic settings and a memorable old-world romance.

OUR VENUE WAS THE PERFECT FAIRYTALE BACKDROP. IF ONE IS EVER TO THINK ABOUT A FAIRYTALE CASTLE, THEN CHATEAU CHALLAIN IS THE PERFECT PLACE. THE ENTIRE VENUE IS BEYOND STUNNING AND IT IS SIMPLY MAGICAL. 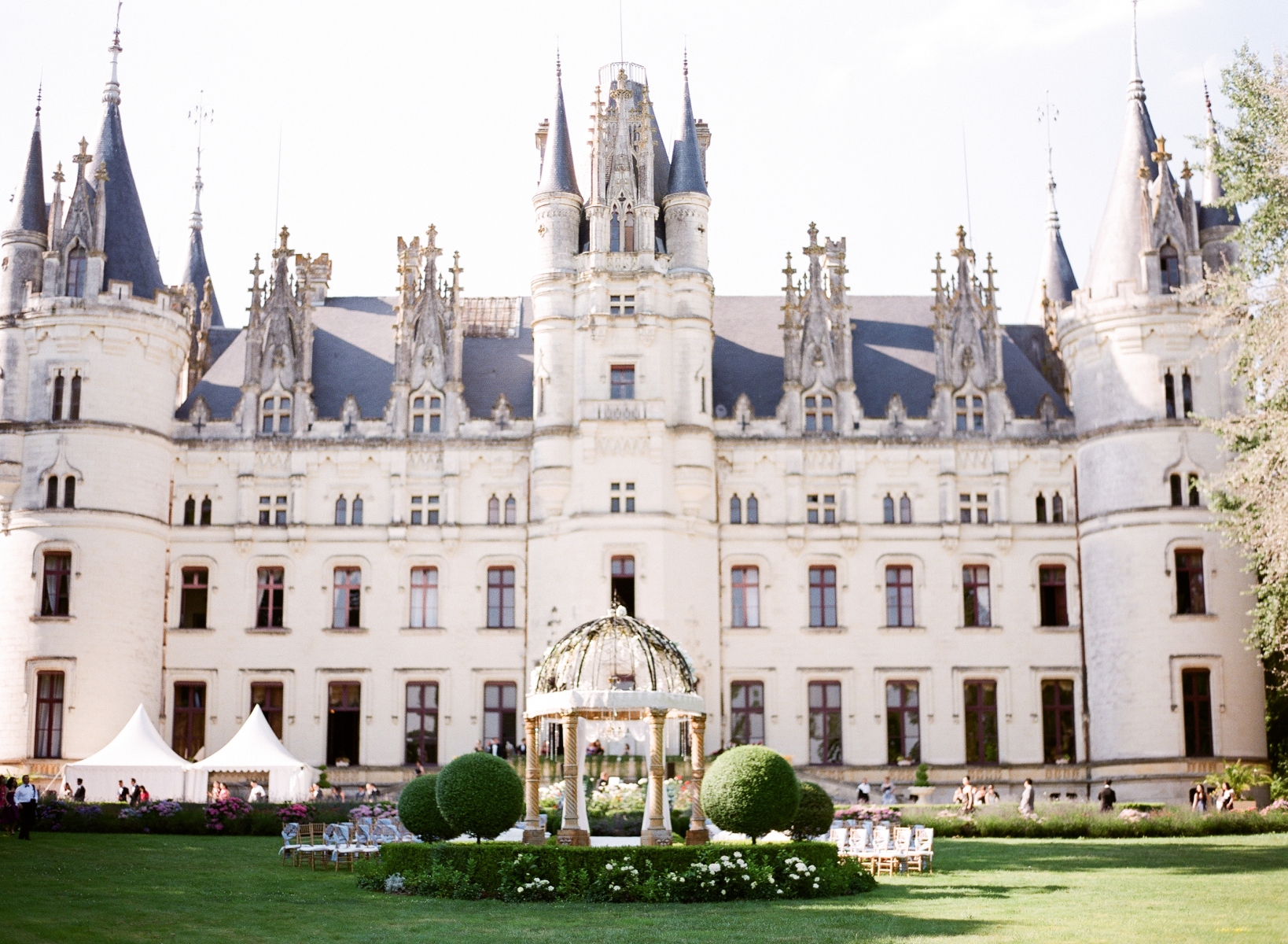 From Paris, With Love:

In the lead up to the wedding the couple enjoyed a weekend of activities, including a pretty perfect Paris trip where Carolyn & Henry posed for some of the most amazing images we’ve seen. Look at that backdrop! 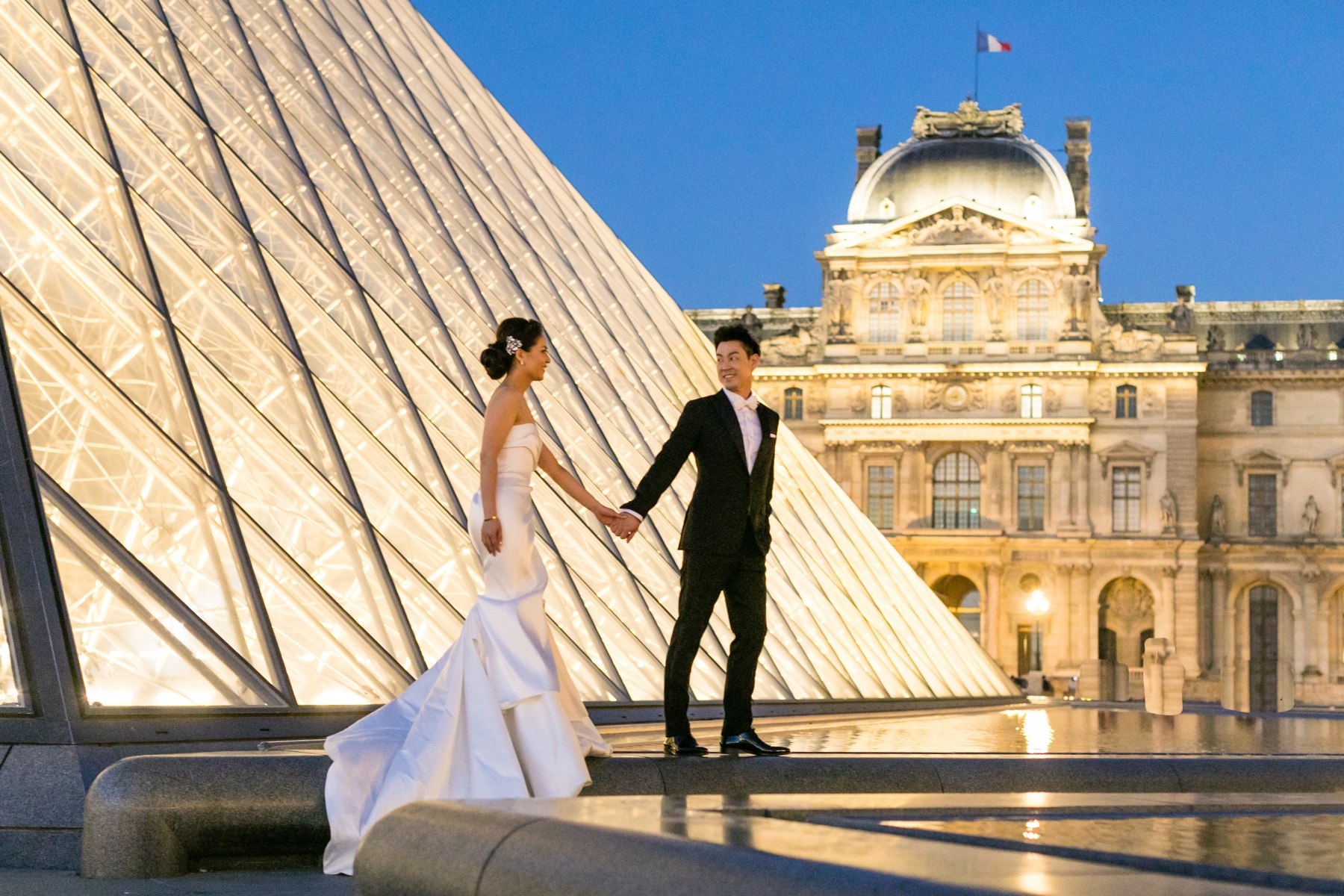 This once in a lifetime experience was followed with a vibrant rehearsal at the Chateau, building anticipation for the big day. And when it arrived, boy did it live up to expectations.

Adopting a blue and gold colour scheme and a mixture of traditional and contemporary touches, the venue was dressed to perfection. The flowers included a special nod to both Carolyn and Henry’s parents – with gladiolus being Carolyn’s late father’s favourite flower and Gerbera daisies being Henry’s late father’s preference – meaning that even though they were not there, the couple’s fathers were still represented throughout the day. This heartwarming tribute set the scene for the day as guests took their seats in the gloriously-set outdoor ceremony in the grounds, eager for the bride and groom’s arrival.

In-keeping with tradition, the latter was first, but the same couldn’t be said for his entrance.Billowing into the grounds on an avant-garde helicopter, Henry made the most sensational entrance to his big day – much to the delight of the guests who couldn’t help but capture the moment on camera. Next was the bride, and after being carried by horse and carriage to the aisle, her entrance left no dry eye in the house, walking hand-in-hand with her mother in front of the awe-inspiring castle. Carolyn’s mother, Queenna Fung, personally hand stitched the floral embroidery on Carolyn’s veil and spent over 80 hours working on it!

All of Carolyn's 10 dresses (yes, 10!) during the wedding activities were more on the regal side of fashion, with her Vera Wang Katherine gown being the very definition of princess ballgown beauty. Henry went with a traditional peak lapel black tuxedo, adding in a fun touch with a white feather bowtie.

When it came to food, the pair went above and beyond to ensure their guests ate like kings and queens. With a Michelin-starred French chef at the helm, the day’s cuisine was a mixture of French and asian with lobster, filet mignon, French cheeses and beautiful deserts on offer. The cake was a five-tier masterpiece constructed by Dealicious Gateaux, comprising of both Henry & Carolyn’s favourite flavours – strawberry shortcake and chocolate raspberry cake.

Words From the Bride:

We got this advice from a lot of people and it really is true. The entire wedding just flashes by. Everything happens really quickly and before you know it, the entire wedding which you spent over a year planning is all over. This is where pictures and videos come in to help you remember things, because honestly, during the wedding everything happens so quickly that the entire experience is slightly a blur.

COUPLES SHOULD REALLY TAKE A MOMENT TOGETHER AT THE WEDDING AND JUST ENJOY THEMSELVES AND LET EVERYTHING SOAK IN.

For more real life romances and wedding inspo, visit our dedicated Real Weddings section or browse the pages of our glossy magazine – available to download now.