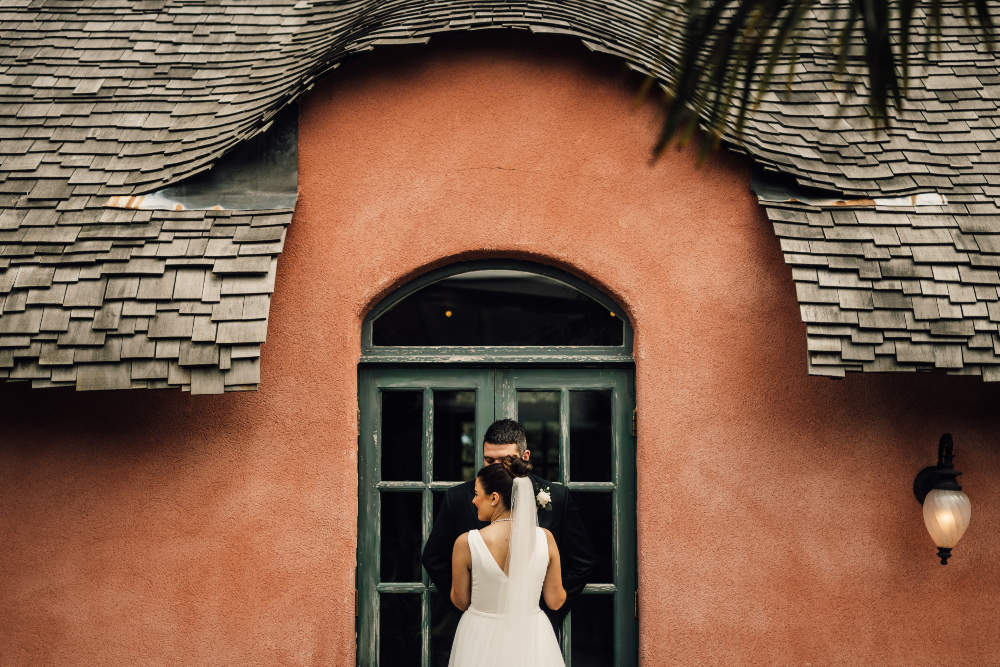 As the saying goes, distance makes the heart grow fonder and this was very much the case for childhood friends Holly and Michael. Despite initially thinking it wasn’t to be and calling things quits, a year into Holly’s uni life nearly 300 miles away, Michael’s winning bet (on a dog also named Holly) led to his lightbulb moment, where he realised that he’d won the love jackpot with her (the real Holly- not the dog).

Ever the romantic, Michael popped the question at their first date location, Lumley Castle in 2015. Although they only took it from Facebook offish’ to ‘OMG we’re about to be Mr and Mrs’ official in 2020, the pair set the date for 12 months later- quite the turnaround in the wedding world!

Having sailed blissfully through the planning process, it wasn’t until the Friday before Holly and Michael’s wedding- which was the Sunday- that things suddenly went South. You can always count on the British weather to throw a spanner in the works and by spanner we mean major storm, that left 700 plus houses and most importantly Holly’s venue, Guest List member Le Petit Chateau, without power or water for her big day. Luckily for this pair, they were quickly able to set their sights on a new date five months later, on Good Friday, a good omen if you ask us!

Despite initially shrugging off their venue, thinking ‘it wasn’t for her’, Holly decided to give this French inspired space a second chance.

MY MIND WAS COMPLETELY BLOWN… AT THE TIME WE HAD TO WEAR MASKS, SO I WAS ABLE TO HIDE THE FACT I WAS CRYING THAT THIS WAS THE ONE!

Completely overwhelmed by the Mediterranean magic of the spaces, and in particular the wedding breakfast room, Holly knew this was the place she wanted to say I do!

I WOULD 100% RECOMMEND THE VENUE AND MY WEDDING CO-ORDINATOR ON THE DAY CHLOE WAS FAB!! SHE REALLY CALMED MY NERVES BEFOR WALKING DOWN THE AISLE

Already head over heels for Le Petit’s interiors, Holly did not feel the need to pick a theme, instead sticking to champagne and cream hues with white and green flowers to complement the botanical bliss they already had going on!

TO HAVE AND TO GLAM

Not one to mess around, holly found her dream dress in, not the third, not the second, but the first boutique she stepped in. Despite initially thinking she would have picked a lace number, Holly instead fell head over heels the opposite - we’re beginning to see a theme here!

Glammed by Guest List Hair and MUA, Claire Alexandra, Holly’s wedding look is giving us all the old school, Hollywood glamour vibes and we are HERE for it!

Out of 10, how involved was your partner in the planning process?

One! And that was just him deciding the evening food, he said he didn’t want anything other than hog roast haha!

What was your funniest memory from the day?

When the singing waiter started performing and no one knew it was staged haha, everyone’s faces across the room were just in complete shock!

I would say to enjoy the planning as much as you can and try and get him involved- and to do more than just pick the hog roast!

For more incredible real wedding inspiration, head to our dedicated page here - all the luxe venues, all the bridal beauty, all the love.