This real wedding at Wynyard Hall was a fabulous, love-filled affair.

What started as a jokey proposal on the first date with a battered onion ring soon transformed into saying ‘I do’ in front of their friends and loved ones in Peter and Michael’s whirlwind Wynyard Wedding. 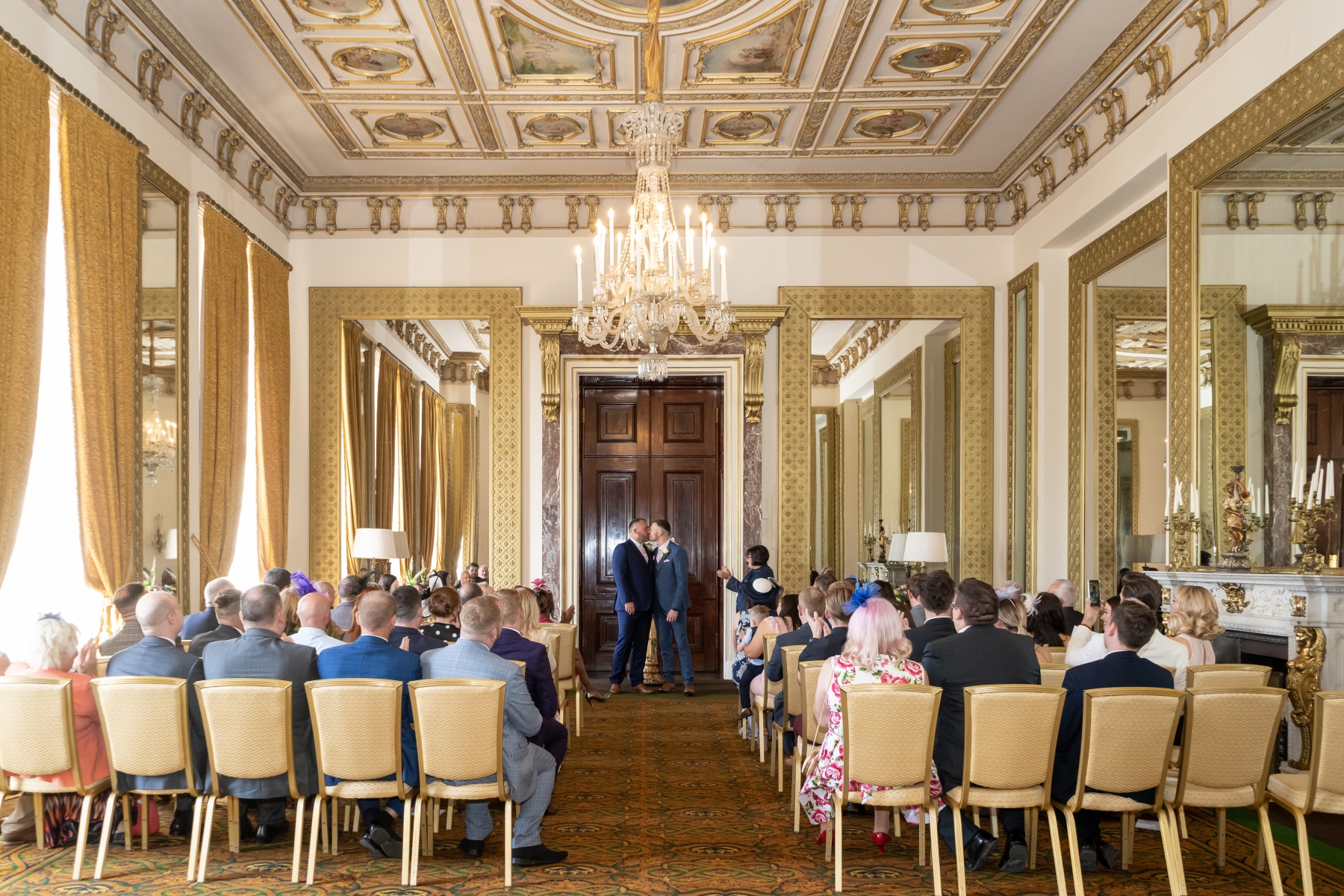 From the Very Beginning

Even before Peter and Michael’s wedding day, Wynyard Hall had a role to play in the couple’s proposal.

Peter colluded with the team at Wynyard to help him propose to Michael. 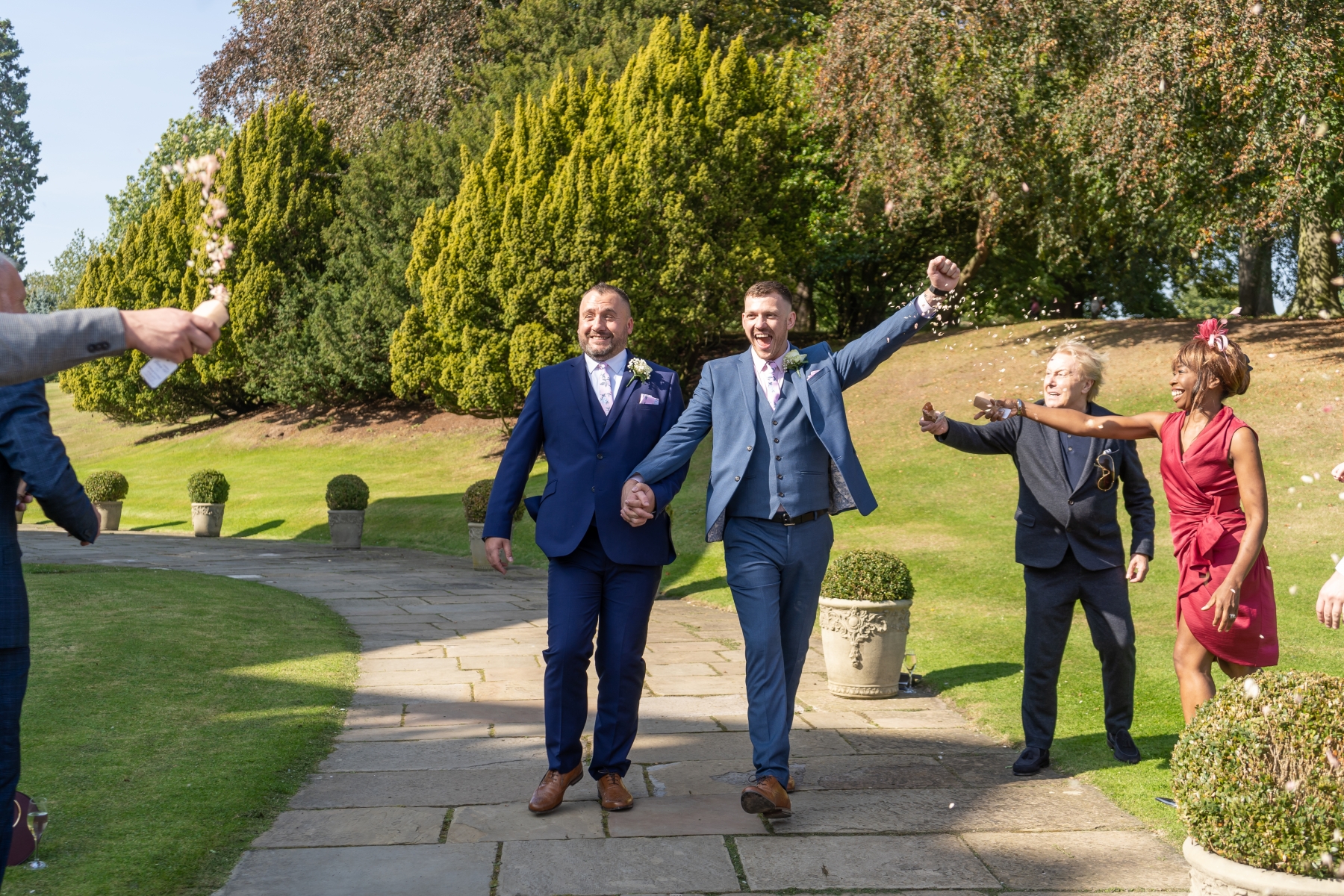 When the couple had the grand ballroom to themselves, Peter popped the question and the moment Michael said ‘yes’ the whole hotel team ran over to the pair with Champagne.

Being a same-sex couple did throw some wrenches into the mix when it came to finding wedding suppliers as many sales pitches were geared more towards the ‘lucky bride’ with less thought given to weddings with two grooms. 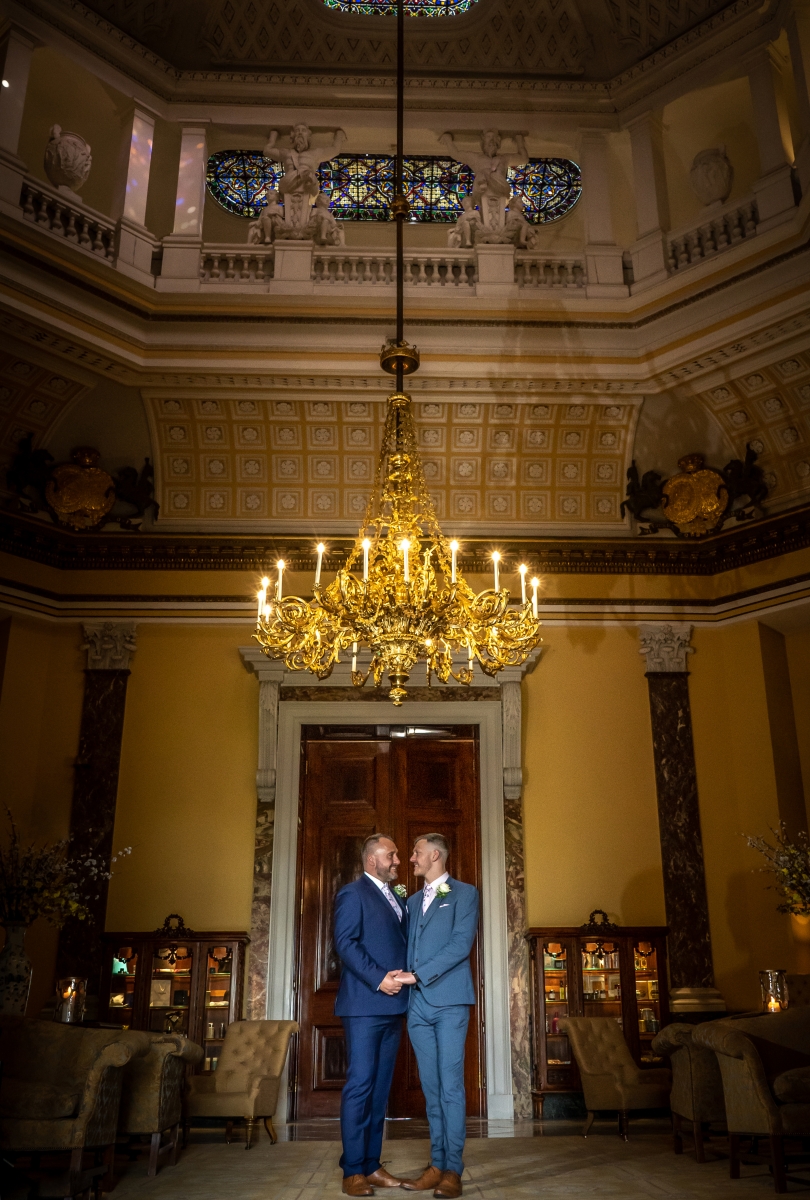 Therefore, Peter launched a radio campaign to promote suppliers who marketed to same-sex couples and that helped them find their suppliers.

One of the suppliers which really stood out for the couple in the end was Pampered Pooches who allowed Peter and Michael’s dog, Teddy, be part of the most important day of their lives.

Peter and Michael built their day around the phrase ‘One Fine Day.’ They wanted their wedding to be a relaxed affair centred around love.

Instead of a formal wedding breakfast, they revisited one of their favourite personal memories together with an afternoon tea.

To commemorate this theme, foliage was presented in delicate vintage teapots and antique cups, while the wedding cake was a tower of Krispy Kreme doughnuts.

From the run-up to through a perfectly kept neighbourhood, to the meandering drive through the extensive grounds, to the ineffable Hall itself, Wynyard is a space which is regal and yet comfortable to guests… in the grooms’ own words “you can’t fault it!” 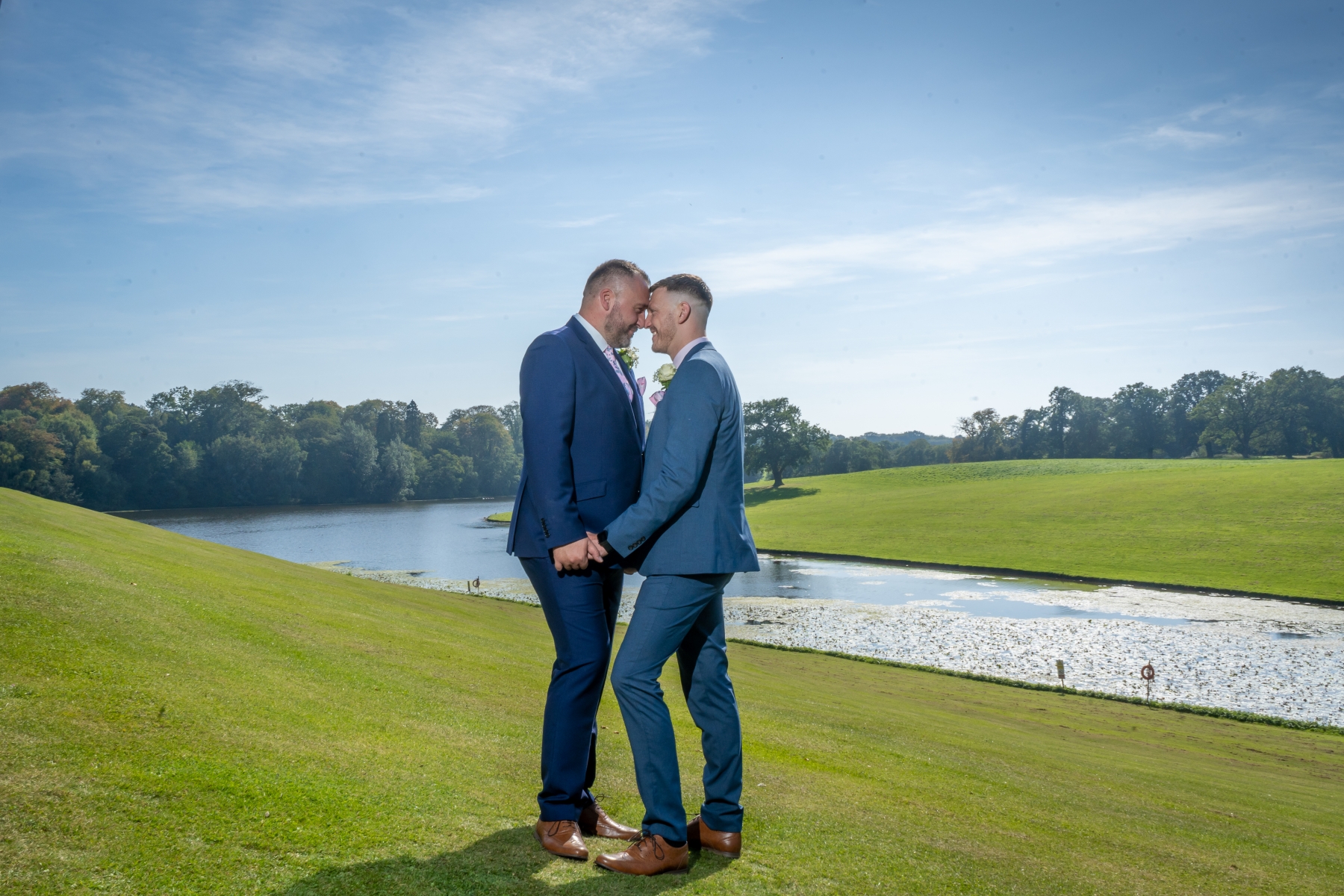 The Man at the End of the Aisle

When the doors to the ceremony suite opened and Michael saw his husband-to-be standing at the bottom of the aisle, his heart was full to burst.

“I’d waited a long time for my life partner and seeing the smile on his face all day is a memory that will last forever.” – Peter

Both grooms had shopped for their suit separately, making it all the more emotional when they first saw each other on the big day. 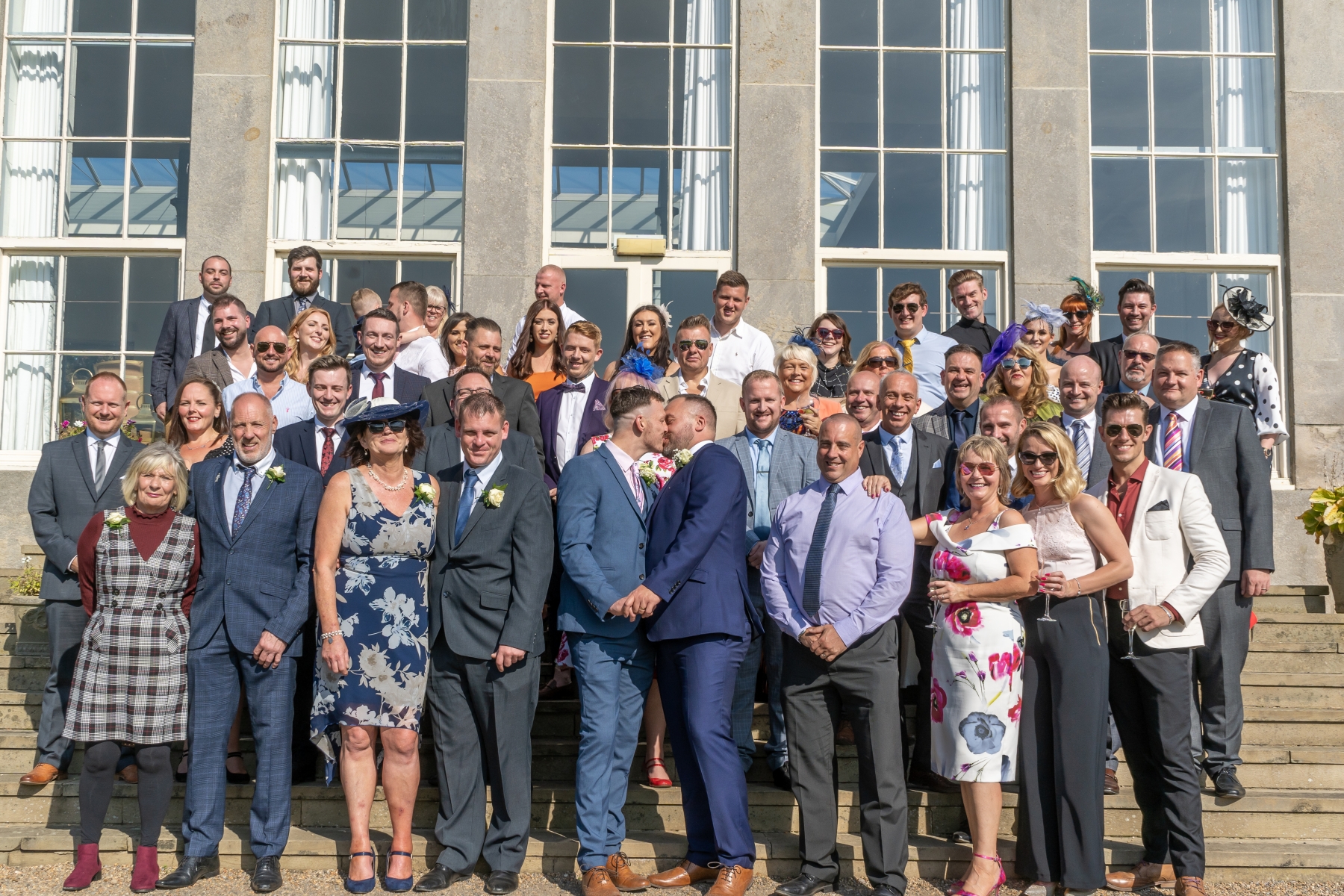 For more wedding inspiration take a look at our dedicated Real Weddings section, or take a look at the glossy pages of our regional magazine now available for download from the Google Play and App Store.