When their Plan A big day fell through, this bride and groom worked against the clock to create a homecoming wedding full of subtle glamour and spectacular razzmatazz at Northumberland’s Woodhill 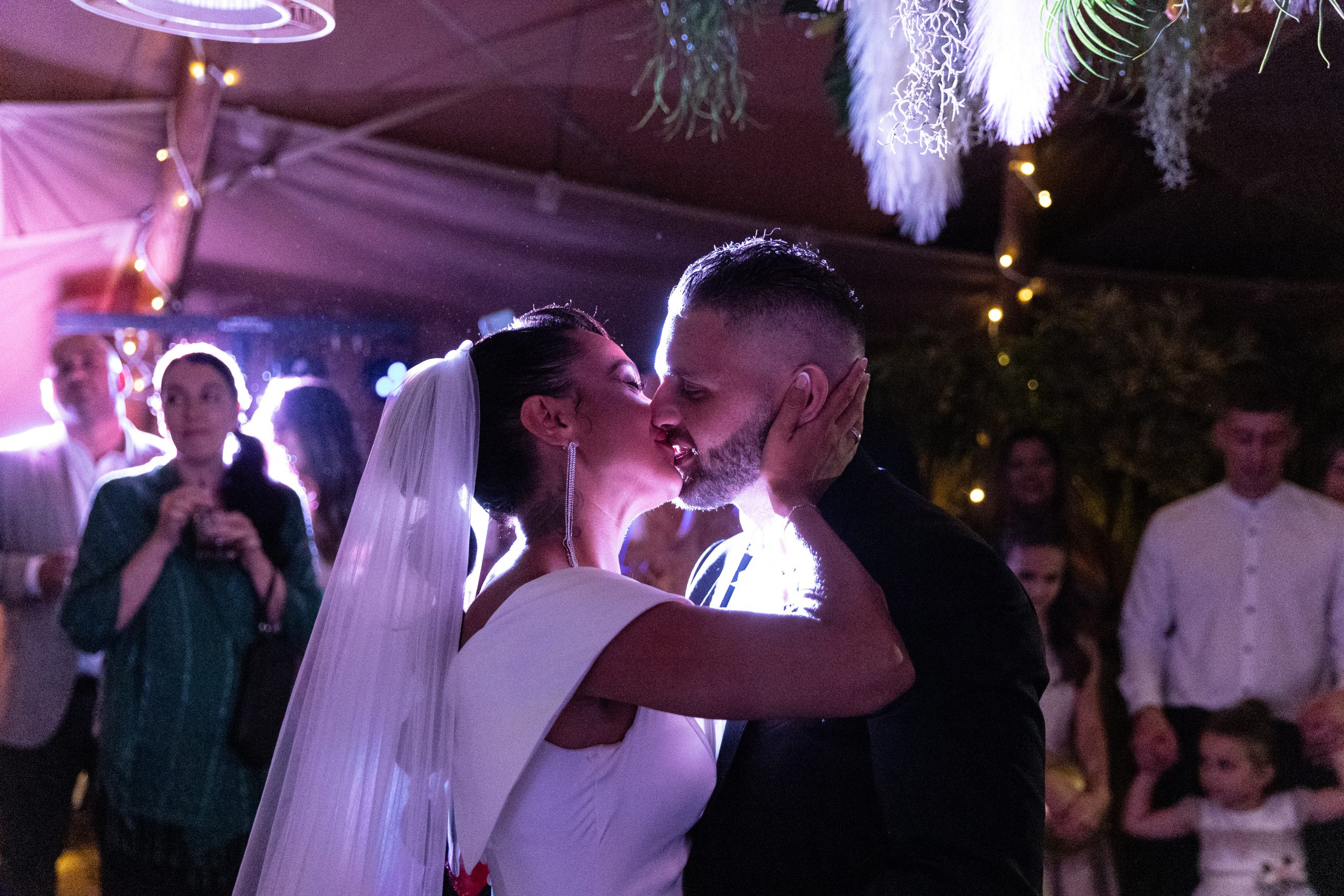 When their Plan A big day fell through, this bride and groom worked against the clock to create a homecoming wedding full of subtle glamour and spectacular razzmatazz at Northumberland’s Woodhill
DATE Sep, 10 2021
|
VENUE Woodhill
|
PHOTOGRAPHY Sean Elliott Photography

Pop starlet, West End performer, children’s book author: you name it, Zoe Birkett’s done it. But with the world on pause for more than a year, she relished the opportunity to immerse herself in family time and home improvements. However, after 20 years of entertainment-industry success, the Darlington lass – who rose to fame on Pop Idol in 2002 – found that not only was her career on hiatus, so was her destination wedding. “Adam and I promised each other that we’d get married before our daughter Aaria started school, and had planned to marry in Bali in 2020 – that obviously fell through,” she sighs. But as pandemic restrictions eased, Zoe had a brainwave: “Shall I give Woodhill a ring?”

Luxurious Northumberland country house Woodhill, an exclusive-use venue set amid a 100-acre private estate, had been Zoe’s top UK venue choice originally, so the bride-to-be called owner, Corrinne to enquire about the earliest available dates. “She said, ‘we have a free date in six weeks.’ Adam and I looked at each other, then I said ‘we’ll take it!’”. Having not seen the property since its most recent refurb, the pair were bowled over by the array of new settings and options available for their day, from the Santorini-alike Olive House to the refreshed Orangery.

Having had a wholly different big-day vision in her head – Otterburn isn’t known for its tropical climes – the tight timeframe gave Zoe renewed focus.

Knowing how hard the wedding industry had been hit, Zoe was keen to celebrate small businesses and fledgling regional suppliers: “I got in touch with friends and family up north for help finding companies that had started during the pandemic.” As a result of clear logistics and a heap of good karma, everything fell into place: from her first-choice photographer making himself available, to her friend Mikey, confirming 48 hours before the wedding that he could perform.

"I asked my good friend, Velma Celli, a very successful drag queen, to play a prank on my husband by pretending to be his jilted ex-fiancée from Turkey. Adam was so confused by this woman screaming in his face and because she’s so gorgeous, everyone actually thought this must be a crazy ex-girlfriend – it was hilarious!" 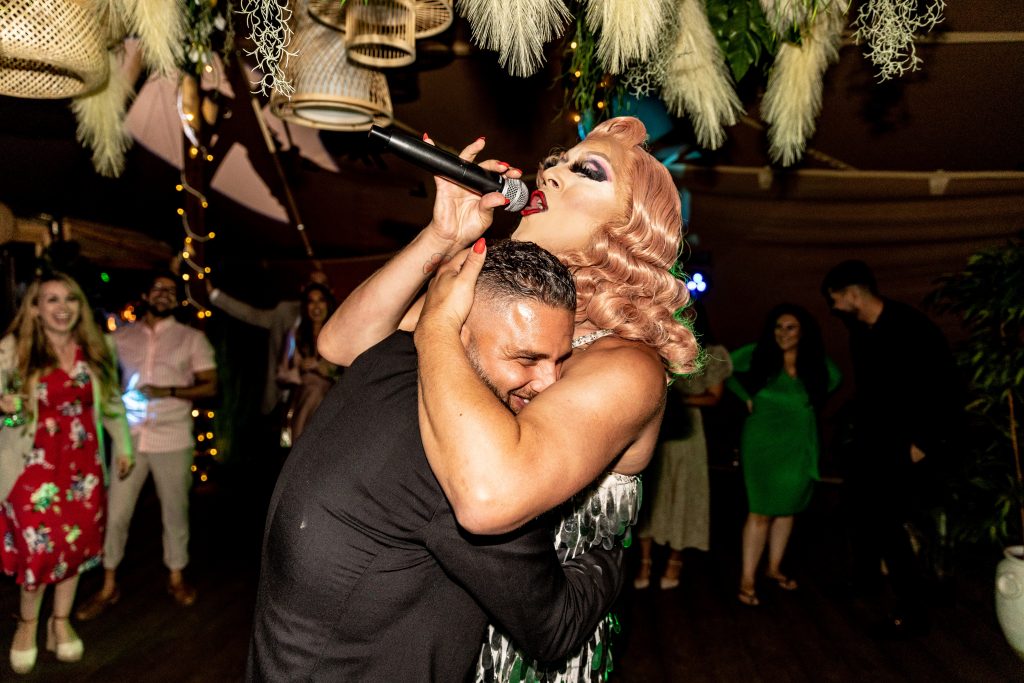 "My florist, Yas – we first met when she was chaperoning at a musical that I was performing in. I got engaged during the run, and she shared her passion for floral design with me. Fast forward four years, and it was really wonderful to be able to champion her talents. She totally nailed my vision for the day, and we were both so emotional when she presented me with my bouquet."

With OTT sparkle dominating her work wardrobe, Zoe realised that an embellished look was not for her. “I hated everything I tried on. I wanted something stripped back and simple, with a bit of leg and nice shoes.” After sketching out the silhouette she wanted, she visited a bridal dressmaker. “I asked if she could make the dress in six weeks and she said, ‘if we start today’”. The result, a luminous, off-the-shoulder Mikado silk gown, not only made her look like a million dollars, it paired perfectly with her sleek updo and orchid bouquet.

Pared-back opulence was the sartorial order of the day, with a sophisticated colour scheme of black, cream, biscuit and caramel. Complementing Zoe’s chic ensemble, her sister and sister-in-law wore black bridesmaid dresses, while Adam and his groomsmen donned black suits with pampas buttonholes.

Such a perfect day

Hosting an intimate gathering of 40, Zoe and Adam’s special day began with a romantic ceremony flooded with natural light in the Olive House. Our bride however, only had eyes for her beautiful little family. “I sent Aaria down the aisle first to our song – Whitney Houston’s All the Man That I Need – which I think broke Adam,” she giggles, before adding, “but we were both emotional once it got to the vows, which we wrote ourselves.”

Personalised cocktails, balloon artistry, and tipi fun for the kids followed in the sun-soaked Elephant Courtyard, before a five-star wedding breakfast in the stately Orangery. “The beef was melt-in-the-mouth delicious,” Zoe recounts. Meanwhile, perfect weather and a serious case of golden-hour glow had photographer Sean Elliot in absolute raptures. “He took 11,000 photos and was there until 1am!” Zoe exclaims.

Let's get this party started

You can take the girl out of entertainment, but you can’t take the entertainment out of the girl. Like any true artiste, this bride wanted to give her guests a real show. “After the year everyone’s had, we wanted to put on a day with pizazz,” Zoe explains. And did they ever! From Wayne on Sax’s eclectic repertoire to a setlist of drag, fire acts, mirrormen and a silent disco, this pair threw the party of the century.